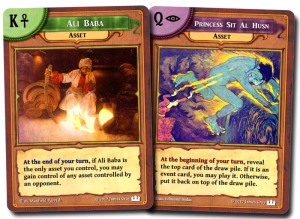 Shahrzad’s One Thousand Nights & One Night has many familiar legends and characters, such as Aladdin and Sinbad. As the game designer of Crazier Eights: One Thousand & One Nights, it’s my job to decide what each character should do in a way that makes some amount of sense. Let’s take a closer look.

Aladdin is known for being a thief or trouble maker. A sorcerer gives Aladdin a ring and brings him to a cave to retrieve a magic lamp containing a powerful jinn, although Aladdin had no idea about the nature of the lamp. The sorcerer trapped Aladdin in the cave as he tried to snatch the lamp, but failed to get the lamp. Luckily, the Aladdin’s ring was able to summon a jinn, and the jinn helped him escape the cave.

Aladdin used the jinn of the lamp to help thwart a princess’s marriage to the visor’s son and create a magnificent palace. The princess was impressed by him and married him. The sorcerer then tricked the princess to exchanging the old rusty magic lamp for a “new lamp,” and he used the lamp’s jinn to transport the palace to Maghreb, his home. Aladdin and the Princess used the jinn of the ring to transport them back to their palace, they recovered the lamp, and they killed the sorcerer.

You can get a translation of the complete story here.

Crazier Eights‘s inspiration for Aladdin is his life as a thief. As such, you get to steal (i.e. gain control) of an opponent’s asset when an opponent has three or more assets. They get a bit distracted by having so many assets that it can be easier to take one of them.

Even so, this ability can also make sense as a more diplomatic ability of getting opposing characters to change allegiances — similar to how he thwarted a marriage and got the princess to marry him.

Queen of the Ebony Isles 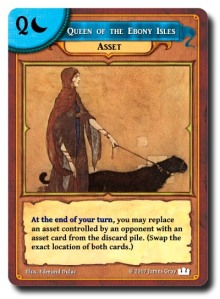 The Queen is an incredibly powerful sorceress. She appears in the story of the The Fisherman and the Jinn, which contains the sub-story, “The King Of The Ebony Isles.” She had an affair with a slave, who was wounded by her husband after he found out about the affair. In revenge, she turned the king to stone from the waist down, transformed the city into a lake, and transformed all the citizens into fish.

In Crazier Eights she can swap a discarded asset for an asset controlled by an opponent. This ability is inspired by her incredible ability to transform people and places into quite different things.

Old Man of the Sea 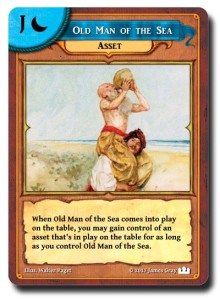 He’s a villain from the Fifth Voyage of Sinbad. He asks Sinbad for a piggy back ride across a river, and he refuses to get off Sinbad’s shoulders after they make it to the other side. He was able to control Sinbad by beating and strangling him into submission. Eventually Sinbad was able to get him drunk and finally got him off. 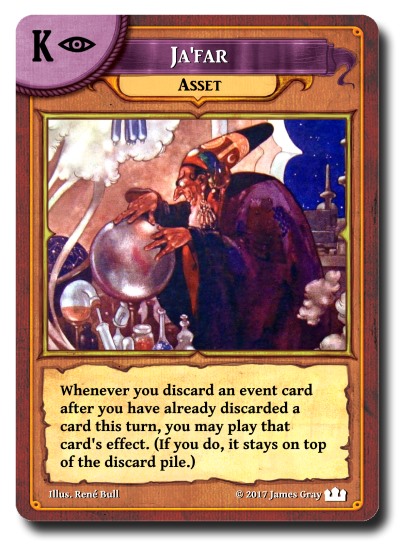 Ja’far is somewhat inspired by Ja’far ibn Yahya, a real life visier/advisor who had an interest in science. He was in both The Three Apples and The Tale of Attaf.

In The Three Apples Ja’far is asked to solve two mysteries: to find a murderer and to find a slave who caused a tragedy.

In the Tale of Attaf, the Caliph reads a book, and he laughs and cries while reading it. Ja’far overhears this, but the Caliph sends Ja’far out into the world rather than offering an explanation.

Ja’far meets Attaf, and he falls in love with a woman who happens to be Attaf’s wife. Attaf secretly divorces her to let Ja’far marry her out of generosity, but when Ja’far finds out, he refuses to have intercourse with her. All of this was described in the book the Caliph read earlier, and Ja’far reads the book for himself.

Then a neighbor accuses Attaf of murder. Attaf confesses to murder to protect his neighbor because he’s such a nice guy, even to those who wish him harm. Attaf is to be executed for murder, but he is then summoned by Ja’far, freed by the Caliph, and is granted the governorship of Syria.

In Crazier Eights, Ja’far’s ability is mainly inspired by his intelligence as a vizier, but he is also a magician similar to some popular media portrayals of men with that name. His ability gives you the power to play the abilities of events that you discard (after already discarding one), which is like casting a spell. 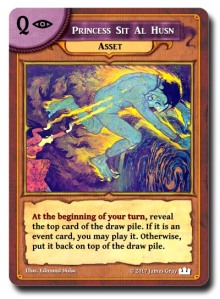 She is featured in the stories, the Tale of Núr al-Dín Alí and his Son & The Second Kalandar’s Tale. (contained in The Porter and the Three Ladies of Baghdad). My main focus here is from The Second Kalandar’s Tale. It is there that a Kalandar (i.e. ascetic Sufi dervish) is transformed into an ape by Jarjaris, an ifrit (evil jinn). People are amazed that the ape can communicate by writing and take him to a king. The king’s daughter, Sitt al-Husn, was secretly taught magic and can see that the ape was a man who was transformed by Jarjaris. She summons Jarjaris and battles the ifrit by using incredible magic to transform herself into different forms and burst herself into flames.

Her ability in Crazier Eights is inspired by her incredible magic ability. Before you draw on your turn, you first reveal the top card of the draw pile. If it’s an event, you may play it. This represents her ability to cast spells.

He was the actual king of Persia from 590 to 628, and he appears in the story, Khursrau and Shirin and the Fisherman. He is famous for his wisdom and powerful love of his wife Shirin.

In this story he generously rewards a fisherman for giving him a big fish by giving the fisherman a lot of money. Shirin says that the reward is too great and will cause rivalries and envy among other fishermen. She advises Khursrau to get his money back, but the fisherman’s witty responses encourages Khursrau to increase the reward, and he advises men to not take the advice of women.

Despite this sexist story, he is now known as one of the greatest and most heroic kings. He also appears in legendary stories outside the One Thousand & One Nights, such as Shahnameh and Khosrow and Shirin.

King Khursrau’s Crazier Eights ability is inspired by his popularity as a ruler. Others are inspired to stay on his side rather than join someone else’s cause. He also has enough power to prevent others from stealing his assets.

She is also known as Sira. She is the great love and wife of Khursrau, and a Christian. She appears in all the stories with Khursrau mentioned above. Despite her bad advice in the above story, she was well known as a faithful wife who was worthy of his love.

In Crazier Eights, she has the ability to get assets from your hand. This is meant to represent her charm and ability to get others to support her cause — by either joining her or giving her other assets to assist her.

Ali Baba is one of the most famous characters from the Nights. and appeared in The History of Ali Baba, and of the Forty Robbers Killed by One Slave. He was a poor woodcutter.

Ali Baba is most famous for finding the hidden cave that the forty thieves used to hide the treasure they stole. The secret door to the cave would open by saying the magic words “open seseme.” He sneaked in the cave and took one bag of gold for himself. Eventually the thieves started tracking him down, but Ali’s clever slave, Marjanah, continually discovers the thieves’ plans, foiled them, and ends up killing them all.

In Crazier Eights, Ali Baba’s ability to take from others when alone is emphasized. If he’s your only asset at the end of your turn, you can take an asset from an opponent.

She is also known as Morgiana. Marjanah was also in the Ali Baba story, as discussed above. She is a slave who married Ali Baba’s son after saving them from the forty thieves.

She is most famous for using her skills and insight to protect those she cares about, and destroying those who intend to cause them harm.

Her ability represents her ability to protect and destroy in self-defense in a quite literal way. She can protect any red or green asset from being destroyed. If she does, she may also destroy an asset.

She originally appeared in The Story of Two Sisters Who Were Jealous of Their Younger Sister. She and her two brothers were told of three magical things: A talking bird, golden water, and a singing tree. Everyone who went on a journey to find these three magic things was turned to stone, including her two older brothers.

Parizade is told that if she hears a certain voice on her journey, she will also turn to stone, so she puts cotton in her ears. She finds all three magic things and cures everyone who was turned to stone. She found out that she and her brothers are all children of the king, and the talking bird tells her how to convince the king of that.

Parizade’s ability in Crazier Eights is inspired by her ability to find magic things. She is one of the most powerful assets in the game.