Who are the legendary characters from Crazier Eights: Avalon? As a game designer it’s my job to try to give them abilities that make sense. Let’s take a closer look and see to what extent I succeeded.

In the Faerie Queene, she is the ruler of the House of Holiness, and she helps the Redcross Knight recover there after he was captured by a villain.

In Tom a Lincoln, she bears the son of Tom a Lincoln (i.e. the Red Rose Knight). She’s the ruler of an island, Fairy Land, which is populated by fairy women who previously killed all the men who lived there.

It was not clear what Queen Caelia should do in Crazier Eights based on the stories, but she is known for having magic power. This is represented by her ability to see possible futures and seek out purple and green assets. This ability is also similar to Percival’s and I thought it simplified the game a bit to use some similar abilities. 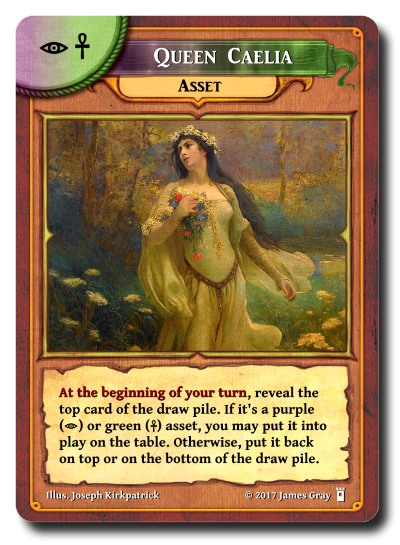 He’s also known as Tom a Lincoln. He first appeared in the book, Tom a Lincoln, mentioned above. He was an illegitimate son of King Arthur and became a knight of the Round Table. He is famous for his quest to find his parents, and he found Fairy Land as an entertaining diversion in the middle of his quest.

Queen Caelia and the Red Rose Knight are both now a bit more obscure.

He’s also known as Bedwyr. He was originally known as Arthur’s highest ranked knight in Culhwch and Olwen (c. 1100).

He is perhaps most famous for a scene in Thomas Malory’s Le Morte d’Arthur (i.e. The Death of Arthur, 1485). As King Arthur is dying after his final battle, he tells Bedivere to return his sword, Excalibur, to the lake that it came from. Bedivere lies and says he threw it in, but Arthur knows he is lying. Then Bedivere really does it. When he really returns the sword, an arm comes out of the water and grabs it mid-air.

Bedivere is now mostly known for his moral virtue and chivalry in protecting the innocent. As such, Crazier Eights makes sure he can be used to help prevent other assets from being destroyed… except for blue assets, who are affiliated with his enemies. 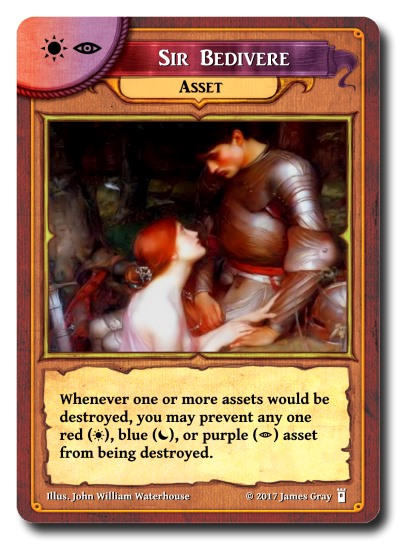 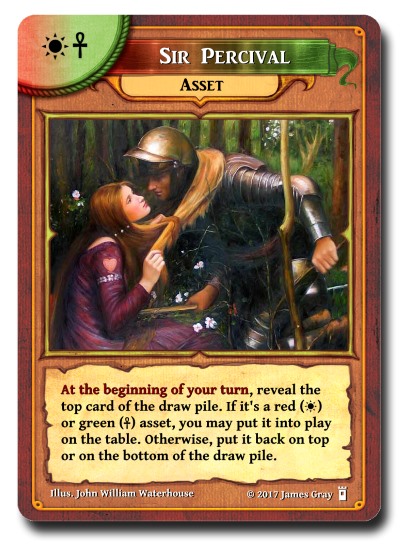 He is a famous knight of the Round Table and was raised in a forest. He was originally mentioned in Percival, the Story of the Grail by Chrétien de Troyes (c. 1190), which also popularized the Holy Grail. He was the knight who saw the Holy Grail, then seeks it out. In a later version, he was one of three knights who sought the grail and they all found it together.

In tradition of his Grail Quest, Crazier Eights gives him the ability to seek it out (i.e. reveal the top card of the discard pile), and get it (i.e. if it’s a red or green asset, you can put into play under your control.) Of course, he might find other red or green allies/assets along the way during his quest.

He is famous for his love for Princess Isolde, who was married to a king, due to inadvertently taking a love potion with her. The Tristan & Isolde story was popularized in the 1100s. He was then added to Arthurian legend in Prose Tristan (c. 1241), became a knight of the Round Table, and temporarily engages in the quest for the Holy Grail.

She is known from the same sources as Tristan above. She is also known as Iseult. She a healer or physician, and she is so skilled that she can heal a poisoned wound Tristan is afflicted with that no one else can.

It is Isolde’s power to heal that is front and center in Crazier Eights, which is represented by her ability to prevent red assets from being destroyed, and rightly gives her the ability to heal Tristan.

The fact that Tristan and Isolde are such famous lovers is represented by her second ability, to give you the power to discard an additional card every turn.

He is also known as Bercilak de Hautdesert. and originally appeared in Sir Gawain and the Green Knight (c. 1390). He is known as an adversary of Sir Gawain, and survived a beheading only to reattach his head to his body.

Crazier Eights takes no position regarding his possible affiliation with Arthur, and he is potentially aggressive to Arthur and those who follow Arthur. As such, he is capable of destroying a red or blue asset every turn, either affiliated with Arthur (red) or Arthur’s enemies (blue). 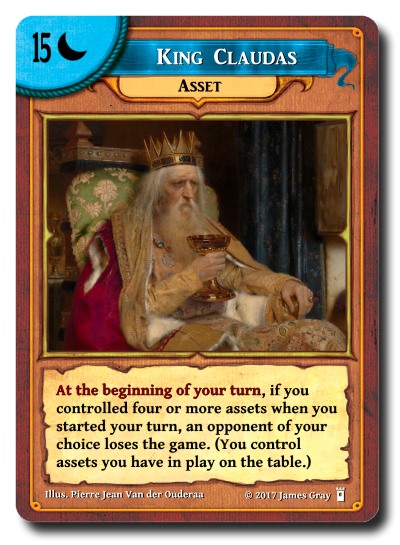 He is a lesser known arch villain of King Arthur, and the ruler of Terre Deserte or Land Laid Waste. He is in multiple Arthurian legends spanning hundreds of years, starting with Perlesvaus or The High History of the Holy Grail (c. 1205) and continuing in Morte D’Arthur (c. 1485). He is known for conquering the lands of Sir Ban and Sir Bors.

As a king known for conquest and an enemy of King Arthur, he is like an evil counterpart King Arthur, who depends on his leadership and followers. For that reason Crazier Eights gives him a similar ability to King Arthur that is a bit more destructive. When you get Claudas and three other assets, you can defeat other players, but only after they have a chance to find an answer.