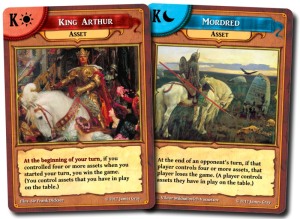 King Arthur is the most legendary King of England who took the sword out of the stone, got the legendary sword Excalibur, started the Knights of the Round Table, defeated the Saxons, and brought peace to England for over a decade through his innovative policies.

He was first mentioned in the History of the Britons (c. 828)

King Arthur’s great leadership is what is most celebrated in Crazier Eights: Camelot. With enough support (or supporters). When you have have Arthur and at least three other assets, and opponent’s don’t have an answer to King Arthur, you win. 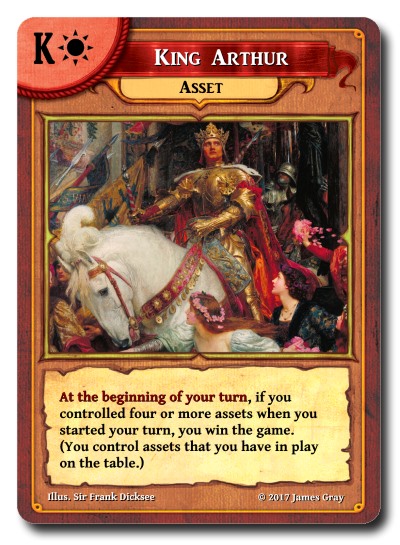 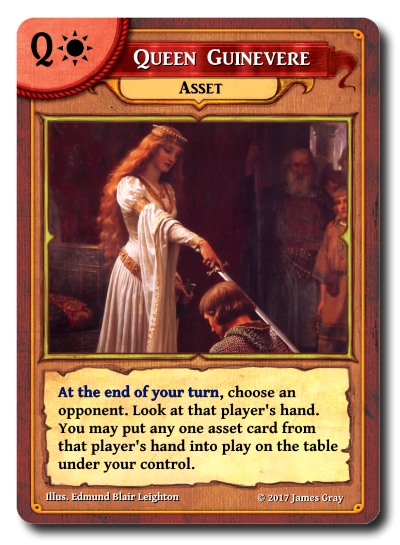 She’s the wife of King Arthur. In the earliest relevant story (the Welsh Triads), she was one of three “Gwenhwyfar” who married Arthur, possibly based on the word “Findabair” for white enchantress or white fairy.

In one of the earliest versions of the story, Geoffrey of Monmouth’s History of the Kings of Britain (c. 1138), King Arthur and his army left England to conquer Norway, Denmark, and Gaul. At that point Guinevere married Mordred, King Arthur’s nephew, who was left in charge of England in Arthur’s absence.

In Lancelot, the Knight of the Cart (c. 1177), Guinevere had an affair with King Arthur’s best friend, Sir Lancelot. This story has been popularized and repeated ever since.

Even so, Guinevere was also known for her intelligence, charisma, and moral virtue, and that is what she is primarily known for now. Crazier Eights mainly celebrates her good qualities in terms of her diplomatic skill. She can learn about the world around her (by seeing the opponent’s hand) and she can get others to join her cause (by giving you an asset as a result). Assets in this case are cards you keep that have ongoing abilities. Keep in mind that taking a card out of an opponent’s hand can help them as well by helping them get closer to having zero cards in hand, which is in flavor of her diplomatic ability.

Sir Lancelot is the greatest Knight of the Round Table, and King Arthur’s right hand man. He was famous for his moral virtue and purity (despite his affair with Guinevere).

He is the embodiment of the paladin/chivalrous knight who fights to protect the innocent. As such, Crazier Eights gives him the power to prevent any one asset from being destroyed. Repeated attempts are no use, he can keep blocking repeated attacks. 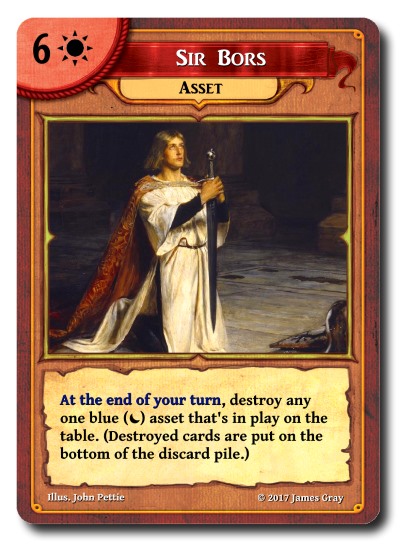 Sir Bors (the younger) is one of the greatest Knights of the Round Table and known for his moral virtue. In Lancelot-Grail (c. 1200s), Bors was one of three knights who attained the Holy Grail.

Sir Bors’s allegiance to King Arthur is emphasized by his opposition to Mordred and Mordred’s allies (blue assets). He is capable of destroying Mordred and the Black Knight. He is also insistent and has to destroy them or their allied assets when able, and you won’t get him to stop, even when they join your side! He only rests when they are all destroyed.

One of the greatest knights of the round table and the son of Sir Lancelot. In Lancelot-Grail he is also the greatest knight ever, who pulled a magic sword from a stone to prove it, and was discovered to be the chosen one. He also initiates the quest for the Holy Grail, helps find it, and ascends to heaven.

In Crazier Eights Galahad’s quest for the Holy Grail is emphasized. Of course, through his search, he can find new allies and assets. So, you get to choose the best card out of three options he can find to draw for your turn. 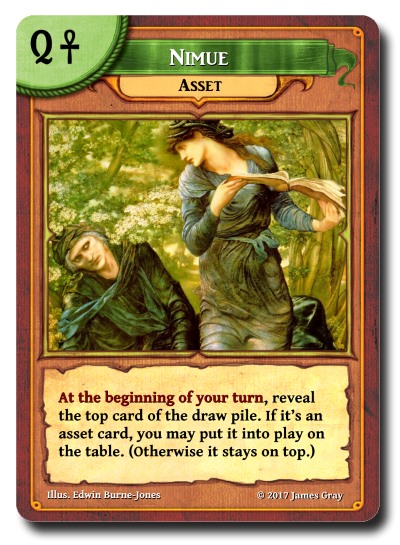 Nimue (a lady of the lake) was originally introduced in Lancelot-Grail as Vivian. She learned magic from Merlin and trapped him under a tree (or, in later versions, under a rock, in a tomb, in a tower, or in a cave).

In the Continuation of Merlin (c. 1240) she gave King Arthur the magic sword, Excalibur. This was famously continued and popularized ever since.

In Le Morte d’Arthur (i.e. The Death of Arthur, 1485) there were two ladies of the lake. Nimue was the good one, who eventually became an advisor to King Arthur. I am mainly continuing that tradition in Crazier Eights, where the name and character was popularized as a more sympathetic and heroic woman. She looks for powerful assets and allies to assist you in your journey.

Merlin the Magician is mostly famous for being an ally, tutor, and advisor of King Arthur. He is also famous for having accurate prophesies, powerful magic, and a capacity to cast spells.

Merlin was originally inspired by the life of Myrddin Wyllt, a legendary bard driven mad by war who fled to live as a wild man in the woods.

Merlin was originally introduced as part of the King Arthur legends in The History of the Kings of Britain. He wished to seduce Igraine, the wife of his enemy, Gorlois. It was there that he helped disguise Uther Pendragon, Arthur’s father, as Gorlois to seduce her, and she became pregnant with Arthur.

Geoffrey of Momouth’s The Life of Merlin (c. 1150) says that Merlin is half demon — his father was a demon and his mother was a human. This is likely meant to explain why he has magic power.

In Crazier Eights Merlin’s ability is inspired by his intelligence. His ability helps you come up with a new idea (i.e. draw  card) and reject two bad ideas (i.e. put two cards from your hand on the bottom of the draw pile. 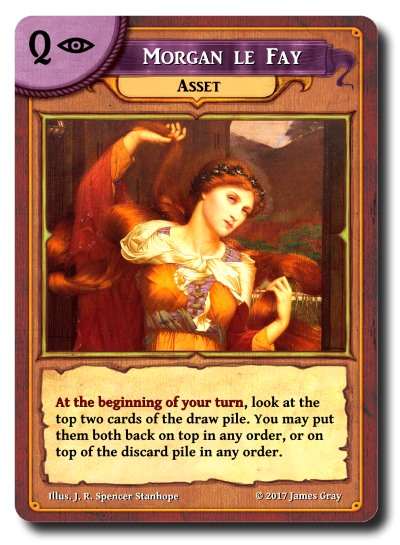 She was originally a healer of Avalon and helped Arthur in early stories starting with the Life of Merlin. Erec and Enide (c. 1170) was the first story that described her as King Arthur’s sister.

She is often thought to be a villain, which was popularized and initially started by Morte d’Arthur, where she puts Merlin to a deep sleep. Crazier Eights does not require her to be a villain and takes no stand regarding that issue.

She is clearly a sorceress in many later stories. This is represented in Crazier Eights by her ability to see and try to change the future.

Sir Mordred, originally known as Modredus, and also known as Medraut, is the great enemy of King Arthur. As mentioned above, originally he was Arthur’s nephew and betrayed Arthur by marrying Guinevere after ruling England for Arthur in his absence in the The History of the Kings of Britain.

In Mort Artu (c. 1235), Mordred is the son of Morgause and King Arthur. He betrays Arthur and brings the downfall of Arthur’s kingdom. 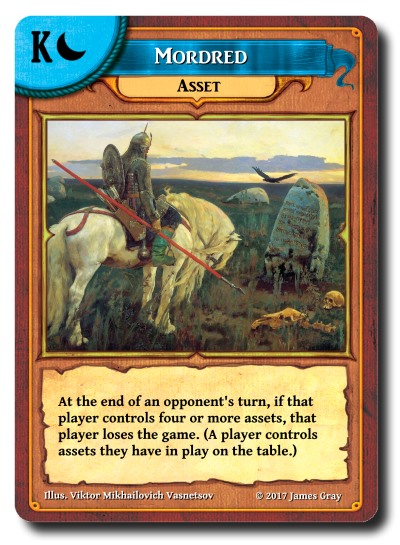 She was originally known as Orcades in Chrétien de Troyes’ Perceval (c. 1155), where she was mainly known as the mother of Mordred. She is also known as Anna in some stories.

As I mentioned above, Arthur and Morgause were the parents of Mordred in Mort Artu. In that story she was Arthur’s half-sister. She is also known for seducing Arthur while unaware of their familial relationship.

Morgause is often now often thought to be a sorceress and an enemy of King Arthur, but Crazier Eights takes no stand regarding that issue.

What is important to Crazier Eights is Morgause’s charisma inspired by her ability to seduce the most virtuous of kings. She is able to get others to join or contribute to her cause. This allows you to take control of other player’s assets.

I studied and show when various important King Arthur stories were developed in my Timeline of King Arthur Legends.