Crazier Eights originally had four colors, each with the same thirteen cards. Crazier Eights: Camelot has fifty three different cards, each with a different ability. The cards are inspired by the world of the King Arthur stories, and it has a lot of the key elements and characters from those stories. Let’s take a closer look at some of those characters and how the ability relates to what the card represents.

King Arthur is the legendary king of England who pulled the sword out of the stone and arguably the most important character of the legends of Camelot.

As an inspiring leader, he can become unstoppable with enough support. So, when you have King Arthur and three other cards on the table, you win the game.

King Arthur developed the Round Table, used to represent equality of all. His knights are the Knights of the Round Table, who were supposed to help enforce justice. In some stories he made sure everyone was equal before the law.

Queen Guinevere is the wife of King Arthur, and she is also an inspiring leader.

As an inspiring leader she can take an asset from another player, who that player chooses to give over through diplomacy, or the asset could be a character who chooses to join her cause.

Guinevere is good with King Arthur because she helps you attain more people and other assets for your team. That represents their team work as King and Queen of Camelot.

Sir Lancelot is King Arthur’s right hand man, the greatest Knight of Camelot, and a Knight of the Round Table.

Lancelot’s main duty to protect the innocent, which is represented by his ability to prevent cards from being destroyed.

Lancelot was King Arthur’s best friend, and they really do work very well together. King Arthur can only help you win with enough assets in play, and Sir Lancelot can help protect your assets from being destroyed. 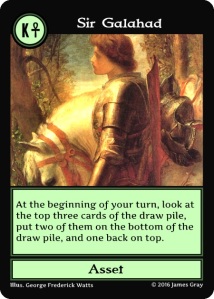 Galahad’s ability represents his powerful ability to search for the Grail and companions. Looking at the top cards is the search for companions and the Grail.

In some stories her name is Vivien or Elaine. Nimue is the greatest Lady of the Lake (there’s more than one in some stories), and the ruler of Avalon. She gave King Arthur Excalibur, the enchanted sword. In a less well known story (Alfred Tennyson’s 19th century Idylls of the King) she becomes an adoptive mother to Lancelot. In the 15h centry Le Morte d’Arthur she becomes an adviser to King Arthur.

Her ability to provide you with assets is representative of the way she provided King Arthur with Excalibur. She can do more than that.

In some stories she seems quite like a human, such as in a story where she learned magic as an apprentice to Merlin (which was first mentioned in the 13th century Prose Lancelot). In other stories she is more supernatural, and perhaps even a Goddess, who might live in a supernatural world.

In the Prose Lancelot Nimue enchants Merlin to trap him under a tree or stone (a villainous act to be sure). A conflicting account, Le Morte d’Arthur by Sir Thomas Malory, says Morgan Le Fay enchants Merlin to a supernatural sleep.

In Le Morte d’Arthur by Sir Thomas Malory from the 15th century, Morgause enchanted King Arthur to seduce him and have his child, Mordred.

Morgause’s ability represents her ability to seduce with magic. She can seduce others to to her bidding by joining you, or to give her assets, which she lets you use to aid you in your quest.

She’s also the sister to Morgan le Fay, mother to Sir Gawain, and wife to King Lot of Orkney.

In the movie Excalibur, she is Morgan le Fay. Crazier Eights: Camelot denies that possibility.

Mordred is the great enemy of King Arthur. His ability to cause a player to lose the game for having too many assets is the perfect answer to King Arthur — if Mordred is in play, then King Arthur can become incapable of helping you win. If you have King Arthur and play your fourth asset, then you will lose at the end of your turn.

Mordred’s ability to defeat overwhelming odds — a King who has an entire kingdom — is also captured well by his ability to cause players who control to many cards to lose the game.

In  Geoffrey of Monmouth’s Historia Regum Britanniae from the 12th century Mordred was a knight of the Round Table who betrayed King Arthur. In later stories, such as the Alliterative Morte d’Arthure from the fifteenth century, he is also the son of King Arthur.

In the ancient story of her (Vita Merlini by Geoffrey of Monmouth), she is a healer who helps Arthur at Avalon once he is wounded. In later stories she learned magic from an education (and even learns it from Merlin in some). (Robert de Boron’s thirteenth poem Merlin is the first story that says she learned magic.)

Le Morte d’Arthur is the first story that introduces Morgan le Fay as an enemy of King Arthur.

According to the Once and Future King, Morgan le Fay is the queen of the fairies. There are stories that she is a fairy, but she is known to be an enchantress at the very least. In other stories, she sounds more human, such as in a story that she learned magic from Merlin, or in another story that she was married to King Urien.

Crazier Eights takes no strong take on who Morgan le Fay is other than that she is not Morgause. Her ability to do magic is represented by her ability to see and manipulate the future by helping you see what cards you could draw and letting you decide for yourself what you would like.

Merlin is the Magician or Wizard, a teacher to Arthur at a young age, and an adviser to King Arthur when he rules Camelot.

Crazier Eights emphasizes Merlin’s wisdom. He helps you come up with new ideas, and reject bad ideas by helping you draw a card, but then getting rid of two cards from your hand.

In one ancient story (Vita Merlini by Geoffrey of Monmouth) Merlin got his magic powers by being half-demon — the child of a human woman and male demon.

However, later stories reinforce Merlin’s knowledge of magic, such as casting spells, as being the source of his magic powers because he is able to teach Nimue, Morgan Le Fay, and/or Morgause how to have magic powers.

Update (10/14/16): I was thinking Morgan le Fay and Morgause were the same person in the book, The Once and Future King, but that was only the case in Excalibur (and maybe some other things).