1. How do you discard additional cards?

Additional cards are discarded one at a time. When discarding a card it must always have the same rank or color as the top card of the discard pile unless it’s an eight.

2. What happens if an eight is on top of the discard pile, but wasn’t the last card discarded?

It’s just an eight with a color. For example, the first card put into the discard pile before the game begins could be an eight. The next card discarded has to have the eight’s color, or be another eight.

3. What if two players draw cards from one ability?

If multiple players would draw cards from the same ability, then each player draws cards going clockwise.

4. Can you ask how many cards are in a player’s hand?

Yes, and they have to be honest. You may also count the number of cards in a player’s hand or in the draw pile at any time.

5. Can you name any color you want?

No. Named colors must be blue, green, red, or purple. e.g., you can’t name pink.

6. If a card ability puts an asset into play, may I still play another asset?

You may only play one card from your hand during your turn as a main phase action. Restrictions regarding playing one card per turn may be ignored when you play an event or asset from an ability.

7. Do I have to use card abilities?

Yes. If a card or ability says to do something, then you have to try to do it unless it says you may do it. For example, Zeus says, “At the end of each player’s turn, put any one asset controlled by a player on the bottom of the draw pile.” If Zeus is the only asset in play on the table at the end of your turn, then he removes himself.

8. What does it mean to gain control of an asset?

You take the asset from another player, and you now control it. Put it in front of you. You now make choices for it, and you use the abilities. It is written for it to be read by the player who controls it.

9. What happens if a card ability does nothing?

10. What happens if you don’t play or discard the card chosen for Destiny?

Destiny says, “Look at any one player’s hand and choose a card from it. The opponent must play or discard that card during their next turn if able.” If the opponent can’t do either, then Destiny’s ability does nothing. However, the opponent can’t use any optional abilities or make a decision that would make it impossible to follow Destiny’s instructions. If a player breaks the rules when Destiny is played against them, they lose the game unless other players allow them to re-do their turn.

Hecate can copy events you play from your hand. It is as though you played the event twice. Resolve one before the other one is used.

12. What does “opponents control X assets” refer to?

13. What happens if you forget to do something?

If a card ability should have an effect on the game but players forgot and did other things, then it is too late with one exception. The one exception is when a player forgot to a draw card during the draw phase – They should still draw the card later if they forgot.

14. Who controls an asset that an ability puts into play on the table?

15. What cards do you control?

You control the asset cards that you have in play on the table. You don’t control cards that are in your hand.

17. Can you protect yourself from losing the game at the end of your turn?

Yes, and you can kill yourself at the end of your turn from losing the game abilities.

For example, Temple of Doom can cause opponents to lose the game. If you get a fifth asset at the end of your turn before it takes effect, then you lose the game.

18. Can you win before the end of your turn?

Yes, the end of your turn is a phase, and you can win before that phase. e.g., you can win with zero cards in your hand before you lose to Temple of Doom.

19. Can you win the game during a card ability before it resolves?

20. Can you prevent something from being destroyed more than once during a turn?

Usually, yes. For example, Sir Lancelot is capable of preventing an asset from being destroyed every single time one or more assets would be destroyed.

21. Can I play a card that has the wrong color?

Yes. You can play a card as an asset or event regardless of the color.

23. Do beginning of turn abilities happen before you draw a card?

24. Can you discard cards at the end of your turn?

No, only during your main phase.

25. Can you ever lose additional discards?

Yes. For example, if you destroy all assets when Stream of Life or Oasis is in play, you will lose your additional discard. However, you can discard before you play a card from your hand to avoid this situation.

26. Can you ever discard cards during an opponent’s turn?

Assets that are controlled by a player are face up.

29. Do you only use “when it comes into play” asset abilities once?

30. When you play an event card, where does it go before the ability resolves?

First you reveal it, and set it aside. It’s in a limbo. It’s no longer in your hand, on the table, or in the discard pile.

31. When you look at or reveal cards with a card ability, where do they go before the ability completely resolves?

32. What happens when Ja’far plays the ability of a split card?

You have to choose which side’s ability you want to play.

33. Can Crystal Palace cause you to draw negative cards?

34. Can you exchange cards with someone who has King Khusrau II?

No, exchanging control requires each player to gain control of the other’s asset.

35. Can you use Mirror Universe when you control zero assets?

Yes. The opponent will gain control of all of your assets (zero) and you simultaneously gain control all of the opponent’s assets. You may also play Mirror Universe on an opponent who controls zero assets.

36. If you gain control of Camelot with Morgause, can you skip your draw?

Yes, Camelot can change Morgause’s ability while you use her ability.

37. Can Sir Lancelot protect himself from being destroyed?

38. Does Sword in the Stone work with multicolored assets? 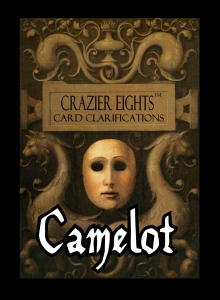