Some people have suggested making changes to the Crazier Eights card frame (template design), which has an area for the card name on the right left side, the suit and rank on the right hand side, and so forth as the following: 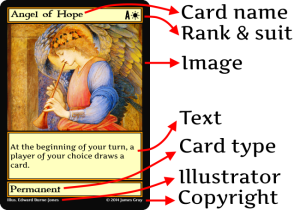 I am happy with the current card frame, but I will say a bit about the potential alternatives that have been suggested. If you strongly think I should make a change, you can let me know.

Regular playing cards have the rank and suit on the upper left-hand side, and some people think it would be easier to see that information based on how they hold the cards if it was on the traditional upper land-hand side. I personally never felt like the cards needed the rank or suit to show on the left-hand side, but some other people do seem to feel differently about it.

What is this all about? Sometimes people hold the cards like this:

As you can see, this way of holding the cards can make it harder to see the rank and suit.

Here is a comparison between the current card frame and the suggested change:

Note that the card name could be a bit more centered rather than to the left hand side of the card.

With the change, people holding the cards might see the following: 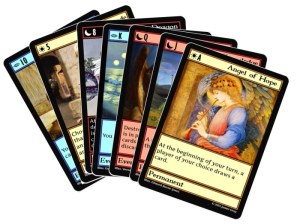 However, I think it is possible to hold the cards in a similar way with the current card frame and still see the rank and suit, like this:

Some people also think the rank and suit is unnecessary because every card of each rank have the same name/image. That is true, but (1) the suit helps color blind people see what color the card is, (2) the cards could be used as a regular deck of playing cards, and (3) the advanced version of the game needs them because all the cards in there are unique, and (4) you could use Crazier Eights first edition with second edition cards as long as you use the rank of the cards.

Some people thought the rank and suit shown on the cards is a bit small. I don’t feel like this is an issue, but I don’t think the change would necessarily be a bad thing. Here is what a larger rank and suit could look like on the cards:

It has been suggested that the card type box could be higher up. That would be more traditional (like how Magic: the Gathering looks). I kind of liked how my template was a bit unconventional, but you can let me know what you think. a comparison between the current card frame and the suggestion can be seen as the following:

There are three reasons that I would prefer not to change the card frame other than the fact that I feel like they are okay as they are currently. One, it would take some work to change all the cards in these ways. Two, I have already been promoting the game using the current templates. Three, anyone who prefers the current templates would be disappointed if they were changed.

Related: Ideas for Changing the Look for Crazier Eights

9 thoughts on “Thoughts on the Crazier Eights Card Frame”