There are many references to Greek mythology in Crazier Eights: Pantheon. The card abilities are based on the characters and places from the stories. Let’s take a look at some of them. 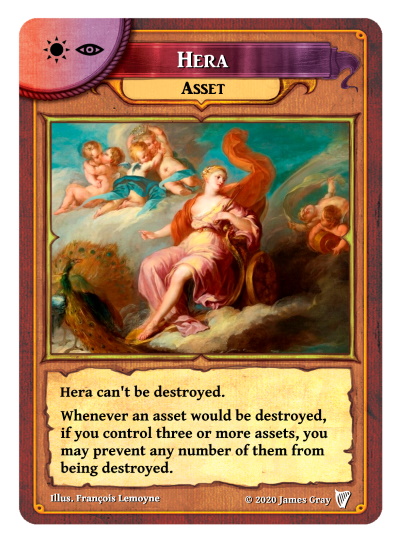 Hera is the queen of the gods. She is also the goddess of women, marriage, childbirth, and family. She is famous for seeking to harm Zeus’s lovers or his illegitimate children. Additionally, she is known for trying to help the Greeks against the Trojans during the Trojan war. At one point she convinces a river (personified as a god) to not harm Achilles when he could drown.

Hera’s card ability to protect assets from being destroyed represents her efforts to protect those who are on her side, such as how she protected Achilles from harm.

Athena is the goddess of war and wisdom. She is famous for her skills as a warrior and helping protect Greek heroes.

Athena’s card ability to destroy assets is based on her skills as a warrior. 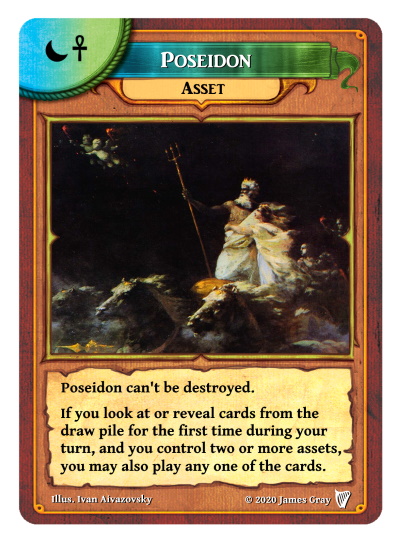 Poseidon is the god of the sea and horses.

In Crazier Eights, the ability to play cards from the top of your draw pile is often associated with discovery through exploration. Poseidon’s card ability is inspired by that. He can aid people in their journeys by sea by providing favorable winds, or hinder them with storms. That manifests in the game by playing cards from the top of the draw pile.

Prometheus is one of the original gods, known as the titans. He is famous for creating the first humans out of clay, and stealing fire from the gods to help humans.

Zeus punished him for the theft by binding him to a cliff and having an eagle eat his liver every day, which regenerates. Eventually Heracles famously saved him from that fate.

There was a trilogy of plays about Prometheus: Prometheus Bound, Prometheus Unbound, and Prometheus the Fire-Bearer. The first of these have survived and can still be read.

His card ability represents his ability to create or provide needed assets, such as how he created humans, and provided them with fire.

Aphrodite is the goddess of love, beauty, and fertility. She is famous for causing gods and humans to fall in love.

The card ability for Aphrodite to take assets from opponents is based on her ability to make people to fall in love, who either join the side of the one they love, or are willing to give gifts to them.

Dionysus is the god of wine and parties.

Queen Hippolyta was the first queen of the Amazons. She is the daughter of Ares, and wears the girdle of Ares. The Amazons were warrior women all related to Ares, who formed their own civilization without men.

Perhaps the most famous story about Hippolyta is that attaining her girdle was one of the twelve labors of Heracles, and she gave it to Heracles willingly.

Her ability reveals the top card. You can play it if it’s a red or green event. If you don’t play it, you can put it on the bottom of the draw pile. This ability mainly represents her power as a ruler and wisdom (to select whether the card is worth drawing).

The Minotaur is a monster of Crete who lived in the Labyrinth, a maze or structure with confusing pathways. He has the head of a bull and body of a man.

Aegeus was the chieftain of Athens and the father of Theseus. Legend has it that he brought a plague upon Athens for killing the son of Minos, the king of Crete. To stop the plague, he had to send seven Athenian youths and seven Athenian maidens to the Minotaur’s labyrinth every 7th year to be devoured by the Minotaur.

The Minotaur’s card ability to destroy assets is based on his power to kill others.

Artemis, the goddess of the moon, is said to live in the wilderness of mountains with an entourage of nymphs. Artemis is also known as the greatest hunter, and many of her nymph companions would be expected to join in the hunt.

The ability of Nymph of Artemis to destroy assets represents her mastery of hunting.

Theseus is the founder and first king of Athens as a unified city-state. He is most famous for defeating the Minotaur. He also completed six labors, which mostly required defeating bandits and other criminals.

The card ability of Theseus to destroy assets represents his power as a slayer of monsters and criminals.