I wanted a game that would show people all the neat things cards can do. I wanted a good variety of characters and effects. Games like Magic: the Gathering showed me that the number of creative characters and card effects could be limitless, but it doesn’t fully live up to the creative potential that we could hope for fantasy card games. There are a lot of filler cards in Magic: the Gathering that aren’t very interesting. A lot of the cards are creatures that pretty much just exist to attack or block. Being combat-oriented leaves less room for creative card effects. 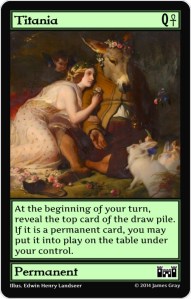 Crazier Eights was made precisely because I wanted an easy game that could have a good variety of card effects. The first edition of Crazier Eights is somewhat limited to reduce confusion and many gamers prefer to play games using the first edition of the game to learn how to play it. Even so, I do hope to release the advanced version of the game to increase the variety of creative card effects.

One example of a card from Advanced Crazier Eights is Titania. It isn’t necessarily too hard for anyone to know what it does to the game. It gives you a pretty good chance of getting more cards into play on the table. The main reason that the advanced version of the game is more complicated is because there are more unique cards to learn, and a lot of people prefer to learn what a handful of cards do (rather than what several different cards do).