One issue when making a game is how to word card text in a consistent way. Magic: the Gathering has a card that says, “Target player draws three cards.” Some people find that confusing. What’s a target?

I used the target template for early versions of Crazier Eights, but I decided that it was more confusing than it needed to be. Now I say things like “A player of your choice draws three cards.” However, another option is to simplify things a bit more. The card could just say “A player draws three cards.” The “of your choice” way of phrasing things might not be necessary and can make the wording a little less elegant. Which way of phrasing cards do you prefer?

Here are examples of how cards can be phrased: 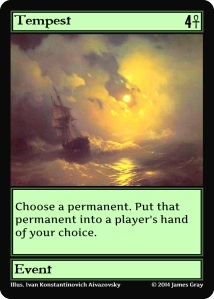 Edit: A friend suggested that Tempest should be worded as “Choose a permanent and a player. Put that permanent in that player’s hand.” That is another option.